with Ric Wilson
Majestic Theatre
All Ages
$22 Adv./ $25 Day of
All Ages 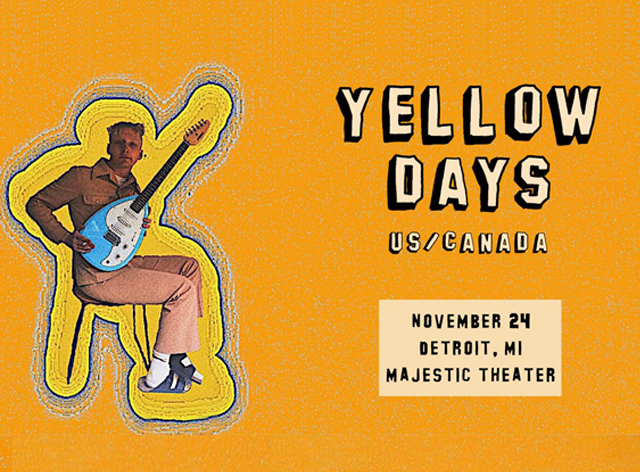 Additional Info
In the interest of keeping our guests and staff protected and healthy, as well as reduce the chance of COVID outbreaks that could put future tour dates in jeopardy, Yellow Days and The Majestic Theatre will require all attendees of the upcoming show on November 24th to show proof of a full COVID-19 vaccination.

All attendees will be required to show one of the following for entry along with a government issued ID:


Artists
Yellow Days
Yellow Days is a project about youth — those sideways times when one's place in the world is fairly guaranteed but little understood, where drugs and love and anxiety and opportunity meld into a sweaty-sweet haze, and all you can do is huff it and press on until clarity comes. Yellow Days is also George van den Broek, a young man with an old soul and the voice to match. His music, fittingly, feels both of his era and completely other: a woozy mixture of soul, blues, psych, and groove leaking through the walls of a jazz lounge that's come unstuck in time. Although, to be fair, he writes the stuff in his parents' garden shed in a Southern England suburb when he's not in California working with a host of similarly talented musicians. A self-taught multi-instrumentalist and self-medicated auteur, George has never fit into one style or space. And as he readies his new album, his sound continues to warp funky, while his words dig deeper into modern malaise and mental health. It is, as he says with a chuckle, "Upbeat existential millennial crisis music."

Yellow Days first turned our ears in 2016 with the Harmless Melodies EP, a bone-deep set of lo-fi gems that found a 16-year-old George putting his smoke-saturated vocal chords to good use, groaning out firsthand tales of heartbreak, hope, and depression — "Gap in the Clouds," about overcoming the latter, was affecting enough to score a trailer for Atlanta's second season. When the dust cleared, he muddied the waters all over again with the collection Is Everything Okay in Your World?, complete with an opening cut called "A Bag of Dutch," a psychedelic trumpet solo, and a sampled Alan Watts discussing how to live more ecstatically. The feel was something like a blues singer on acid — produced by a collagist — who was equally enamored of Ray Charles and Mac DeMarco. He's since been teasing us with singles: "How Can I Love You?" with it's Toro y Sinatra sway; the breezy but doubtful "What's It All For?"; "Just When," coproduced by Nate Fox (Chance the Rapper); and "It's Real Love," cowritten by John Carroll Kirby (Solange).

"I'm trying to brand my own version of ironic dance music full of depressing truths about feeling distant from your friends, or a sense that nothing is worth anything," George elaborates on his current direction. In particular he's been diving into the '70s: fusion-era works of Herbie Hancock and Quincy Jones, the funkier phases of Marvin Gaye and Curtis Mayfield, and the keyboard wizardry of Don Blackman and Weldon Irvine. He's been staying up until 5 a.m. watching Soul Train on YouTube, and testing his falsetto. George released his last few singles — including the wonderfully wobbly "The Way Things Change" — both independently and thinking of each song as its own independent thing. Yellow Days' upcoming album will not only be his major label debut, but also a proper culmination of ideas, however wild they may be. "The dance beat being different from the lyrics is a metaphor for drug usage, the way you're dealing," explains George of his current sound. "The track is funky as hell because you're not handling yourself correctly."

Despite his unpredictable approach, it's not hard to see how George became Yellow Days. He grew up in a family that loved discussing the psyche — dad was a psychologist, mum held a few literary degrees — in a commuter village an hour outside of London. He'd come to know Haslemere as "a lovely town full of degenerate teenagers smoking weed while their parents were at work." But first, at 11, he found the outlet for his coming adolescent boredom in the guitar he received for Christmas. That day, his brother taught to play him "Smoke on the Water." By the evening, George had rearranged Deep Purple's chords into his own thing. After that, he'd disappear into his room for hours upon hours, deconstructing songs, inventing his own, and scouring the web for more fodder. He was drawn most heavily to old soul (Charles), plus the blues (Howlin' Wolf) and jazz (Billie Holiday), until, at the tender age of 13, he saw DeMarco's "My Kind of Woman" video and fell in love. George promptly stopped learning others' music and focused on his own.

Aside from a short stint, at 14, as lead singer in an outfit with his brother and a 35-year-old man they met through an ad, George realised he preferred to create music alone, so he did. He knew what he wanted to hear and he learned to play it — bass, drums, keys, etc. At 16, a couple of school friends told him about Logic and it changed his world. He dropped that EP — playing guitar and all else into his laptop in his bedroom — and then he dropped out. Driven, he commandeered the garden shed out back for his studio and started going to work every day. A year later, he'd signed to London's beloved Good Years label (Banks, Francis & the Lights) and found his Everything LP stirring up press, festival slots around the globe; tours across the U.S., Australia, and Japan; and sold-out nights at iconic U.K. clubs Scala, Koko, and Electric Brixton.

Of course, he's barely been home since. On the road, Yellow Days is also a band — which includes those old Godalming College friends — and they've clearly been quite busy. Also, in anticipation of his Columbia Records debut, George has at last opened up his recording process to outsiders, spending time in sessions in Los Angeles (including Raphael Saadiq's bandmates) and elsewhere. By overseeing the production process, George is more in charge of his own fuzzed-out, technicolor vision than ever. "This is really my first record where I can let it fucking all out," he says. Which begs the question of what lovely madness could possibly await listeners.

Despite George being an old soul — he hates social media, loves vinyl, and collects old cameras — Yellow Days really is a project about youth. Therefore, George says, "When I become a bit older, I'm not Yellow Days anymore." At which point, one imagines, he'll suddenly find himself leading the house band in a quantum disco at the edge of the universe.
Ric Wilson

Voted 2nd best live show in Chicago 2019 only after Lizzo for his Pitchfork performance (Chicago Tribune), Ric Wilson is a young Chicago stand out that makes party-ready hip-hop with an intelligent twist. Wilson’s funk/disco-infused take on rap stimulates both the mind and body with robust percussion, buoyant vocal arrangements and triumphant instrumentation. Wilson’s music is playful and poignant, with  youthful innocence that’s still ever-aware of the difficulties life may throw at you. But instead of lamenting and brooding, Wilson chooses to bask in the beauty of it, dancing through the struggles while remaining acutely aware of his emotions.