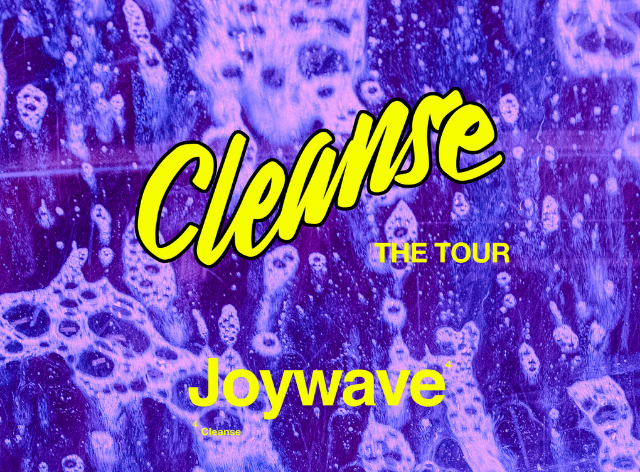 When Joywave formed in 2010, frontman Daniel Armbruster was writing and recording songs in his parents’
basement as he embarked on a fruitful period of self-discovery. Ironically, after spending the past ten years
touring the world in support of three critically acclaimed albums, the new Joywave EP, Every Window Is A
Mirror, was crafted under strikingly similar circumstances. “When I was making these songs, it was like I was
back in my post-grad years, but it was in my basement now,” Armbruster recalls with a laugh. “I thought, okay,
what do I want to do? There’s nobody here again.’” With a virus ravaging the world and no possibility of
touring for the foreseeable future, Armbruster was once again able to dig into his own psyche and see what
surfaced. “The writing this time was really introspective because I didn’t want to go upstairs and turn on the
TV, you know?” he explains. “The only part of the world that made sense to me was my little corner where
I’m making music.”
Over the past decade, that little corner has expanded from Armbruster’s parents’ house in Rochester, New
York, to the Lollapalooza stage, tours with everyone from Bastille, Brandon Flowers to Young The Giant and
late-night television appearances that have allowed Joywave to beam their infectious brand of indie rock into
households all over the world. However, the release of the band’s 2020 album Possession admittedly felt a bit
anticlimactic. “We released Possession on dare I say the worst possible day of March 13, 2020” Armbruster
said with a sigh, adding that the band had just gotten back from Europe when the virus put everyone’s lives
on pause. “So much time and effort had gone into that record and suddenly the touring cycle we had been
planning on for the next year was already over when we landed at the Newark International airport.”
Although Possession, which centered around themes of control and polarization was remarkably prescient,
that’s little consolation to a band who thrives for live performances. “I feel like we made the record for right
now last time, weirdly,” he explains.
Flash forward to now, their Every Window Is A Mirror EP is as much a commentary on the way things are
currently as it is a look toward our collective future. It’s poetic without being preachy and is unabashedly
Joywave in a way that further solidifies their sound as something that, like our world, is in a state of perpetual
evolution. For this EP, Armbruster wrote demos and sent them to the band—drummer Paul Brenner, guitarist/
bassist Joseph Morinelli and keyboardist Benjamin Bailey—before piecing together the resulting tracks in
Armbruster’s basement studio. “The process itself was very different in that Paul and I were in the same room
for three days and the other files were sent electronically,” Armbruster explains. “Weirdly, this is our most
live-sounding record, which is funny because 90% of it is one guy sitting downstairs.” The dynamic sound of

the EP is as much of a testament to the performances on the album as it is Armbruster’s production prowess,
which combines organic and electronic elements into a soundscape that continues to unfold itself with each
listen.
From the ambient, dancey groove of “Pray For The Reboot” to the brooding and expansive “The Inversion”
and the bass-driven shuffle of “After Coffee,” the Every Window Is A Mirror EP has a melodic sensibility that
serves as a constant between these four songs despite the fact that they all have their own unique musical
personality. “I was very conscious of not doing the same thing again with these songs,” Armbruster explains.
“Possession had the crazy production of [2015’s] How Do You Feel Now? and the increased emotional depth
of [2017’s] Content, so for these songs it was important for me to move past that and bring something a little
different to the table.” This sonic step forward is illustrated on the EP’s title track, which features a syncopated
bass line, instantly infectious chorus and lyrics that somehow make the phrase “carbon neutral” sound catchy.
There is also an element of honoring the beauty of simple pleasures during volatile times, something that
Armbruster exemplifies on “After Coffee,” a song he describes as a “celebration of the mundane.”
“Normalcy is so beautiful when you’re coming from the chaos of Newark International Airport in 2020 coming
back from Europe and you’re like, ‘Are they going to close the border?”’ Armbruster says of the track’s
quotidian charm. “It’s definitely not a quarantine song, it’s just this thing that I think all touring people feel
when you get back from tour of ‘Wait, I have to decide what’s for dinner? It doesn’t just show up?’” he adds
with a laugh. “Once you’re home it’s a weird psychological adjustment. But the older I get the more I
appreciate that when I’m home, this is where I’m being a person, not the other thing; the other thing is weird.
It’s just celebrating that and cherishing those moments,” he adds. That said, the song is still inherently
relatable if you don’t spend half of your year on the road.
Even now, there is a hopefulness that shines through on these songs that will undoubtedly resonate with the
listener. “I still feel lucky to have that time even right now, it would be nice to go play the last record for
people but having unchecked creative time, it’s not so bad,” Armbruster explains. A history major by nature,
Armbruster is fascinated with this moment and the Every Window Is A Mirror EP is an aperture into
Joywave’s creative process during it, which is as likely to inspire introspection as it is the urge to dance away
the collective uncertainty of the moment. “If this is the last time that I get to talk to the audience or share my
ideas with them, what do I want to say?” he summarizes. “Not only that, but what have I learned uniquely
through this crazy life of mine that I can share with them?” If nothing else, this EP answers those questions in
a way that is distinctively Joywave.