with Adam Melchor
Majestic Theatre
All Ages
**SOLD OUT**
All Ages 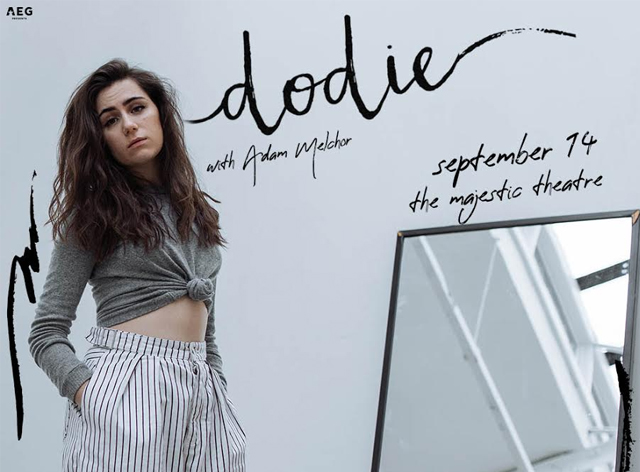 Most adults in their mid-twenties have grown up with the internet in some way; in dodie’s case she grew up in front of it. As a teenager living in Epping - a town in Essex, dangling off the north-eastern end of London’s Central Line - dodie started up a YouTube account, and began releasing her own songs on the platform ever since. Fast-forward seven years, and she has built a dedicated following that numbers into the millions. It’s a following that has also taken her right to the Top 10 of the UK album charts (her last EP, ‘You’ charted at No.6). By thoroughly modern means, dodie has become one of the most successful DIY artists of recent times. ​Once most comfortable armed with a microphone and ukulele in her bedroom, releasing music on the platform that started it all, dodie’s grown to love the stage. Next year she plays London’s Roundhouse, which sold out five months upfront; an unprecedented achievement for an artist without a debut album to her name.

Going right back to the beginning where it all began - dodie’s first upload was a song called ‘​Rain’ - music has always been her first love. Raised on a soundtrack of Queen and Electric Light Orchestra, her lunch breaks at school were jam-packed with various extracurricular clubs. “It was like, choir, the recorder, orchestra, wind band, african drumming... and I went to every single one,” she remembers. “Such a music geek.”

Making music always seemed like a second nature medium for ​chronicling her feelings. ​“It’s such a nice way of exploring something so complex and giant in your mind,” she says. “Returning to it, too, and finding new meaning in it. They’re like, capsules of time. It’s like writing a diary.”

“​I make whatever I want, I’m making music I want to hear now,” dodie explains. “​I get overwhelmed by a feeling, and it’s easy to hold onto and write around that. ​My songs are like an exploration of a certain feeling. Sometimes I write down phrases which people have said…. I think every songwriter’s notes app is full of shit,” she laughs.

Dodie has always been a frank and honest presence online, too. As well speaking openly about everything from bisexuality to her struggles with mental health issues, her music directly addresses these same experiences. Speaking about the EP’s title track, ‘Human’, dodie points out that “​when I wrote it, I thought it was a love song.

This is just me talking about the excitement of getting to know someone closely. I look back and there’s so much codependency,” she says. “There’s a line in there,” she adds, quoting a lyric, “‘​you’ll fit so nicely, you’ll keep me intact​’. That’s not what a relationship is!” dodie says today. The very fact that she still chose to keep these lyrics intact, true to the moment that she wrote them in, says it all.

In recent years, dodie has chosen to take a step back to let her art do the talking. “​I loved sharing about my life, because it felt so comforting to have a place to do that,” she says. “It felt like a big old support group. Obviously the internet is complex and messy and I think I got a bit too big, and I was sharing too much,” she freely admits. “So then I took a big step back, re-evaluated, and now I’ve created healthy boundaries, I hope. I’m human!”

In this spirit, ‘Human’ is also the title of dodie’s third EP. Revisiting old songs familiar from the past - a refreshed version of ‘She’ now “soars in all the right places” - and thinking aloud when it comes to the complexities of moving forward as an artist on ‘Not What I Meant’, it’s a collection of songs that dices with staying grounded and touchable; a mile away from the polished world where she began. ‘If I’m Being Honest’, meanwhile, captures the jolting excitement of an all-too-brief crush that unfolds over a single day. “I was told this is where I will start loving myself / Flirting's delicious; proved to be beneficial for mental health,” she quips with a typically whip-smart couplet. However, as we learn from ‘Human’ - which touches on the title-track’s hints of “codependency” through to ‘Monster’s defiance - things are rarely that simple.

“​I’m real, I promise,” dodie says. “Everything that I do online is real. I just want to be understood. How can I shake it into you that I am real?” ‘Human’ might just provide the answer.