with Men I Trust, Renata Zeiguer
Majestic Theatre
All Ages
$25 Adv./ $29 Day of
All Ages 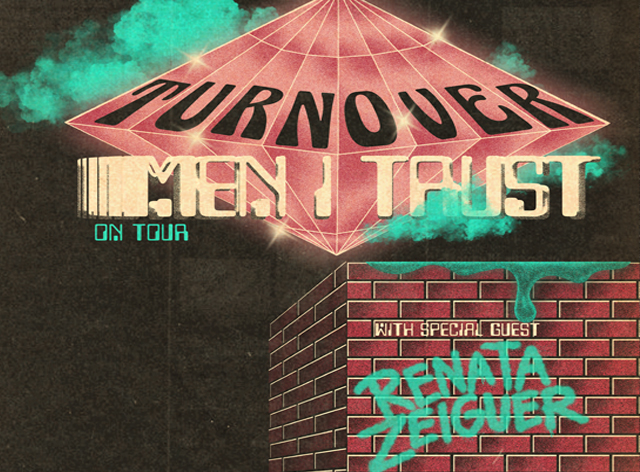 Additional Info
Artists
Turnover
There is a closeness at the heart of Turnover’s aptly titled new album, ‘Altogether.’ Though it’s the first collection the trio has written while living on opposite coasts, the record actually represents the group’s most collaborative and connected work to date, showcasing the intuitive, near-telepathic relationship frontman Austin Getz has developed over the years with his bandmates.

“Instead of making things more difficult, being far apart helped us learn to appreciate each other even more,” says Getz. “As a band, we’re closer now than we’ve ever been before.”

Recorded at Philadelphia’s Studio 4 with longtime creative foil Will Yip at the helm, ‘Altogether’ finds the group breaking new ground on a number of fronts. Pop sensibilities inform the writing for the first time, with elements of funk, jazz, lounge, and disco mingling alongside the band’s trademark indie grit and punk energy. Lush melodies and infectious hooks reflect the newfound freedom and confidence that have inspired Getz since his cross-country move to northern California, while adventurous recording techniques and instrumentation lend a fresh perspective without sacrificing the kind of precise detail and rich intricacies that have come to define the band’s recent studio output. The result is an album that boasts both sonic sophistication and emotional accessibility in equal measure, a major leap forward in sound and vision that reveals time apart as the true key to togetherness.

The title is fitting in another way as well, according to Getz. “On this record, more than in the past, we wanted to keep in mind the beauty of writing ‘popular music,’” he explains. “By that I mean music for people who don’t have the time to delve into the niches and find fringe artists, music for those of us who are busy with work or our families or whatever problems might be around. Music is real magic that can change people’s days and lives, and the more people listening and loving, the better.”

Turnover first emerged roughly a decade ago in Virginia Beach, VA, but the group’s critical and commercial breakthrough didn’t arrive until six years later, when they cracked the Top 5 on the Billboard Heatseekers Chart with their acclaimed sophomore album, ‘Peripheral Vision.’ The band—which consists of Getz, his brother Casey on drums, and their childhood friend Danny Dempsey on bass—followed it up in 2017 with ‘Good Nature,’ a streaming smash that racked up roughly 40 million plays on Spotify alone and which Vice proclaimed to be “their best album yet.” Reviews were similarly glowing around the world (Pitchfork praised the record’s “rhythmic propulsion and harmonized guitar sparkles,” while Exclaim! hailed its “shimmering instrumentation and luscious harmonies,” and The Line of Best Fit swooned for its “plush production” and “subtle maturity”), and the album earned the band headline dates everywhere from Brooklyn Steel to The Fonda Theatre along with their first appearance at Coachella.

“With ‘Peripheral Vision,’ I was starting to experiment with psychedelics, and I was feeling alienated from a lot of the things I’d been raised to believe and accept,” Getz reflects. “That album asked a lot of questions, and I felt like ‘Good Nature’ was my attempt to find the answers to those questions. This time around, though, I found myself in a very different place, both literally and metaphorically.”

Starting over from scratch somewhere new, particularly somewhere as rural and isolated as Getz’s new home in northern California, proved more challenging than he had anticipated.

“The move was great in a lot of ways,” he explains, “but the experience also de-romanticized a lot of the notions I had about leaving everything behind and relocating to the woods. I realized I’d been undervaluing a lot of things that were actually really important to me, like having friends and family close by. I had to come to terms with being a stranger and learn how to trust new people and make new connections all over again.”

For the first time, Getz found himself looking inwards instead of outwards for inspiration, writing as an act of self-exploration rather than in response to any external stimuli.

“There was a deepening of my relationship with music that came out of the whole experience,” he explains. “Instead of waiting for some revelation to arrive, I would make myself sit down with a guitar or at the piano and just play until something interesting happened. Often what came out surprised me.”

Sometimes an entire song would reveal itself in ten minutes; other times, Getz would land on a guitar riff or a chord progression that he’d revise for months.  The band spent time writing together in-person on tour and during time off in New York and Portland, with Yip flying out to join the band for the latter.

“Will’s much more than just a producer for us at this point,” says Getz. “He’s a close friend and a reliable piece of what our sound has become.”

That sound is the product of a remarkably wide range of influences and tastes, which Turnover synthesizes on the album into a whole far greater than the sum of its parts.

“Working remotely for the most part, everybody was able to send ideas around on their own schedules, and nobody felt too protective of anything, so the new songs started to reflect each of our personalities more than ever before,” says Getz. “Collectively we like everything from jazz to folk, disco to rock and roll, and a lot in between, and it’s where we all intersect that things start to feel special. With the three of us and Will all contributing to the writing together, the songs turned out better than anything any of us could have done on our own. That’s what makes the experience of being a band really unique as opposed to just one artistic mind.”

‘Altogether’ demonstrates the band’s eclectic mix of personalities from the very start, opening with a lo-fi, jazzy intro that quickly gives way to the driving drums and delay-drenched guitar of “Still In Motion.” Like much of the album to come, the song is a meditation on change and perspective, on learning to quiet your mind and appreciate the moment before it’s gone. The bittersweet “No Reply” reckons with guilt over failing to be present with a loved one, while the effervescent “Much After Feeling” recognizes the sacrifices we make to stay connected across geographical distance, and the breezy “Parties” grapples with the kind of self-consciousness that can leave us prisoners of our own design.

“There’s a part in that song where the tone completely changes,” says Getz, “and that represents the moment when your walls finally come down and you start to just appreciate where you are. The lyrics go from describing the nervousness you feel in a particular moment to just describing the moment itself because you’re finally out of your head and able to recognize the beauty that’s all around you.”

Getz taps into that beauty throughout the record, stopping to smell the roses and ground himself in ways that might have seemed impossible even just a few years ago. “Starting to feel at home in the country,” he sings on the hazy “Valley of the Moon,” while the sultry sax of “Ceramic Sky” hints at the simple and sensual pleasures of falling in love, and the playful “Plant Sugar” channels 80’s Britpop as it makes a case for mindfulness.

“I was stressed out when I first started writing that song, but then I looked up at the sky and saw the constellations and felt ridiculous for being worried about anything,” he laughs. “It reminded me that sometimes you just need a little change in perspective to appreciate how lucky you really are.”

Turns out, that’s all Turnover needed, too.
Men I Trust

Men I Trust is Dragos, Jessy and Emma.

Founded in 2014, Men I Trust (menitrust.com), is an indie band from Montreal (Canada) who loves smooth sounds, calm melodies and simple rhythms that relax, but make your right foot tap and your chin bounce on the beats. They record, mix, master and shoot their music videos.

Men I Trust is doing well online, with more than 30 mentions on Hype Machine (including several top 5 positions) and 6 million streams on Spotify, SoundCloud and YouTube. 2016-2017 concerts: Osheaga, Canadian Music Week (Toronto), Festival International de Jazz de Montréal, the Festival d’été de Québec, M for Montreal, Pop Montreal, Shanghai, Shenzhen and Beijing. In 2017, Men I Trust’s “Lauren” is SubmitHub’s all time no1 song and several other songs are on many Hypeddit top 5 charts, on daily basis. In spring 2017, the band launched and sold out it’s first vinyl album and released a single (You Deserve This) on Adult Swim’s LUXE Playlist. The single “Tailwhip” followed in September. It reached 2M plays on Spotify in less than two months and got named no1 song of 2017 by Gorilla Vs Bear.

Renata Zeiguer is a Brooklyn-based multi-instrumentalist singer-songwriter, the daughter of Argentinean and Philippine immigrants. An NYC native, she grew up playing classical and jazz music, beginning on the violin and the piano at age 6, and listening to her grandmother play ragtime and tango music obsessively on a baby grand during family visits in Buenos Aires.

She began writing music as a kid, with mostly instrumental compositions that evolved from hourslong improvisations while seated at the keys after school. Initially drawn to composers like Prokofiev and Debussy, she grew to like songs that could be sung, falling in love with the great early 20th century American jazz standards, Brazilian tropicália, and the Beatles. She eventually expanded her compositions into lyrical song writing while studying at NYU, where she met long-time collaborator and producer of her upcoming debut, Adam Schatz. Since joining New York’s independent rock scene as an original member of Schatz’s band, Landlady, Renata has sung and played violin and keys on many projects including Ava Luna, Twin Sister, Leapling, Cassandra Jenkins, The Relatives (Ian McLellan Davis), Christopher Burke (Beach Fossils), Quilt, Skaters and Ex-Reyes.