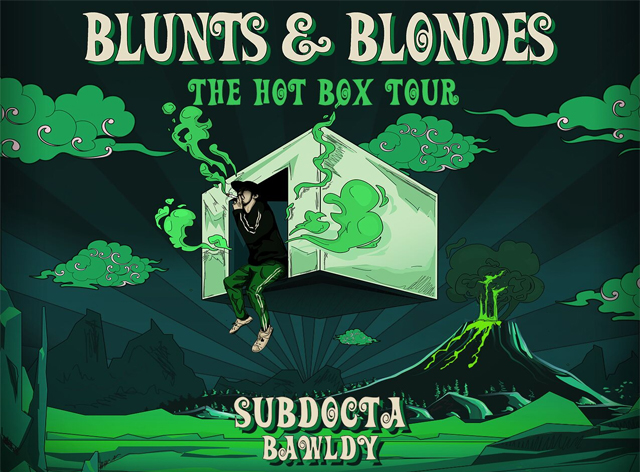 Entering into the music scene from a giant cloud of smoke, Blunts & Blondes is taking the dubstep game by storm. Formally known as Michael Guard, he's the life of the party whether he's on the decks or in the mosh pit. His dynamic personality, style and unique talent is rocking the masses all over North America in the festival scene as well as in clubs.

Blunts & Blondes isn't just making it in the game, he's trying to change the way it works. His sound and styles are the furthest thing from cookie cutter. He creates his own, unique vibe by blending all elements of bass music and even sprinkling in hip-hop and deep Rastafarian influences. One thing is for certain, this young smoker is only getting warmed up as he prepares to leave the entire dance scene in a total haze. You are destined to leave the show with a contact high that you won't soon shake.

SubDocta
SubDocta exploded onto the scene in 2017 with his wildly successful single “2009 Was Tight”, catching major support from a number of heavy hitters, including Bassnectar and Ganja White Night. SubDocta is most know for producing his own brand of hybrid dubstep that he has ‘so eloquently’ dubbed “West Coast Wobble”, paying tribute to his upbringing on the west coast. In 2018, SubDocta’s music released on Fresh Blood, Borgore’s new imprint, as well as SubCarbon, Ganja White Night's imprint, whom he has now officially inked a deal with after the release of his debut EP on the label. In addition, SubDocta also toured as support for Zomboy, Ganja White Night, Riot Ten, Dirt Monkey, Opiuo, and others in 2018, while hitting some of the most sought after bass festivals in the US and Canada.
Bawldy
Media