with Sultan + Shepard
Majestic Theatre
Ages 16 and Up
$28.00
All Ages
Buy Tickets 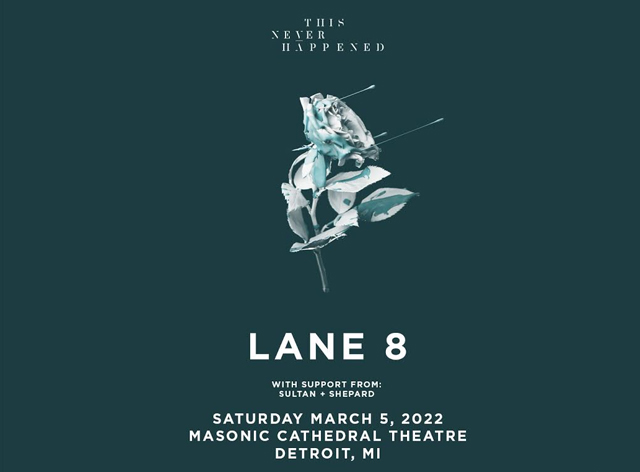 Ticket holders have until July 17th to request a refund for this show. Requests received after that date, along with tickets purchased after the rescheduled date was announced will not be eligible for a refund. Visit majesticdetroit.com/rescheduled for instructions on submitting your request. Refund requests for box office purchases must be made in-person at the Garden Bowl 11am-6pm weekdays only.

We are so bombarded with negative energy at the moment, especially on the internet, and in my opinion you have to literally and consciously remove yourself from the loop at times to remember all the positive and amazing things happening every day. ‘Brightest Lights’ is about focusing on that positivity in the world.”

Released in January 2020, Lane 8's third album ‘Brightest Lights’ captures the positivity and emotion of the Lane 8 DJ experience, as well as offering more of the reflective and emotional songwriting featured on his last LP.

Join him as he brings the album tour to Detroit at Majestic Theatre on March 27th.

The album tour will once again promote his This Never Happened concept, with the dance floor becoming a phone and photo-free space.

Leave your phone. Experience the moment. This Never Happened.

Lane 8 has partnered with PLUS1 so that $1 from each ticket will go to saving lives, revitalizing communities, and transforming global health through Partners In Health. www.pih.org

Artists
Lane 8
Sultan + Shepard
After a chance meeting in the after hours club scene in Montreal in the mid 2000's, Ossama Al Sarraf and Ned Shepard quickly discovered that they had a natural musical chemistry. They soon began collaborating on original songs, remixes, and songwriting, officially forming Sultan + Shepard in 2010. From collaborations with revered EDM artists such as Dillon Francis, Tiesto, and Fedde Le Grand to remixes for major pop acts like Coldplay, Ed Sheeran, Lady Gaga, and Madonna, the duo established themselves as one of dance music’s leading partnerships. The 2012 release of their anthemic single "Walls" vaulted them on tour across the globe with stops at Ultra Music Festival, Tomorrowland, Mysteryland, and a residency at the Wynn in Las Vegas. In 2013, their remix of Bruno Mars’ "Locked Out Of Heaven" earned them a Grammy nomination. More recently the duo received the Canadian songwriters SOCAN Music award for International Song of the Year for "Bad", the multi-platinum single which they co-wrote alongside David Guetta, Showtek and Vassy.

In the spring of 2016, the duo inked a multi-single deal with Armada. Love Me Crazy," the first single under Armada, was released in summer 2016. Most recently, the duo reunited with singer Nadia Ali to release the folk inspired dance anthem "Almost Home" also featuring NYC based songwriter Iro. This was followed by the melodic "Bloom" featured as the opening track on Armin Van Burren's A State of Trance Ibiza.
Media