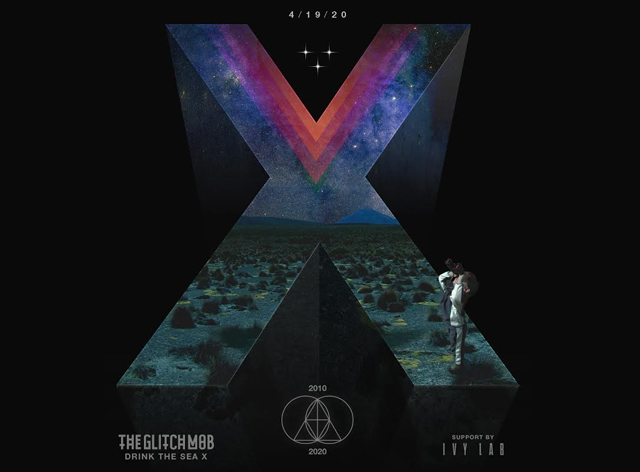 The Glitch Mob – the Los Angeles-based trio comprising Justin Boreta, Ed Ma, and Joshua Mayer – continues their forward movement into 2018. Boreta, edIT, and Ooah came together around 2006, passing through various members until settling on this core trio of musicians. Together, they combined their different skills and aesthetics into the compellingly collaged whole that has become one of the most beloved live electronic acts, and distinctive recording artists, working today.

Ivy Lab
Originally starting life as a trio, North London outfit Ivy Lab were brought together out of a shared enthusiasm for experimentations on the fringes of the UK bass music scene. The years that followed saw them go from strength to strength, earning a place in 'The top 10 DJ's of 2015' (Mixmag) and propagating a new generation of hip-hop inspired abstractions housed within the framework of their '20/20 LDN' project.

The duo now find themselves at the apex of the 'Halftime' / 'Future Beats' / movement -- A motley assortment of actors from across the bass music landscape applying their sonic-heritage to experiments with hip-hop and drum machine electronica.

Ivy Lab invested further in the exploration of this sound with the creation of their '20/20 LDN' clubnight. Housed primarily at Brixton's Phonox nightclub, it earned the characterisation of "ultra innovative" (Timeout Magazine) and a "London standout" (Mixmag).

Minted in late 2015, and borrowing the same raison d'être as its elder sibling nightlife brand; 20/20 LDN Recordings was unveiled with the pseudo-mixtape/compilation LP "Ivy Lab presents 20/20 Volume.1" -- described as "uncompromising, insightful and rather awesome : 9/10" (Mixmag) and "impossible to categorise : 9/10" (DJ Mag) . Little over a year (and only 5 releases deep) the label was awarded the title of 'Best Breakthrough Label 2016' in the DJ Mag 'Best of British Awards 2016.'

Now a galvanising presence in the 'Future Beats' movement, Ivy Lab's' "20/20 Volume.1" release and the subsequent follow up E.P's were benchmark moments in forging the genre into a pillar of the electronic music landscape. Tracks such as "Spooky Dub," "Can't Say No" & "Peninsula" all garnered incredible currency, supplemented by showpiece remixes for Banks ("Fuck with myself") and Noisia ("Tentacles").

Ivy Lab head into the horizon not only with an anchored presence at the cutting edge of the bass-music landscape, but also a secured reputation as pioneering label bosses & event promoters in ownership of one of the UK's most exciting contemporary music brands.
Media
Media