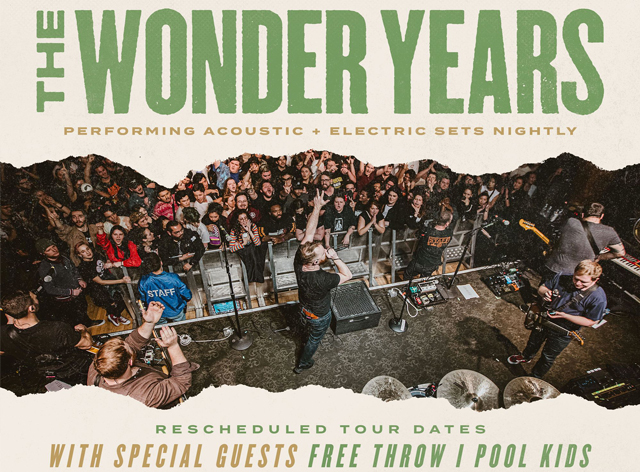 Ticket holders have until June 1st to request a refund for this show. Requests received after that date, along with tickets purchased after the rescheduled date was announced will not be eligible for a refund. Visit majesticdetroit.com/rescheduled to submit your request. If you purchased tickets in-person at the box office, you will have 30 days from the date the box office re-opens to request a refund (the box office will reopen when deemed safe to do so by local officials).

Artists
The Wonder Years
This February and March, The Wonder Years will be doing very special shows performing two sets every night: an acoustic set to celebrate the release of their new acoustic EP, Burst & Decay (Part Two), (out February 2020 on Hopeless Records) and full-scale, electric sets consisting of songs from their entire catalog. They are bringing very special guests Free Throw, Spanish Love Songs and Pool Kids.
Free Throw

Two years before emo/indie rock outfit Free Throw formed in Nashville, the Memphis Grizzlies made national headlines for their “grit and grind.” Some not familiar with basketball may assume this was another phrase describing the team’s tireless work ethic. Journalists and analysts claimed this “grit and grind” was their disruptive defense. A ‘free throw’ is usually given to a player disrupted by defense — so while unintentionally borrowing the ethos of their home state’s NBA franchise, Free Throw went on the offensive.

Consider the band’s signature play: a three-guitar attack which stacks raw immediacy with large-scale aspirations. Sometimes this arrangement is abrasive; other times it’s more nuanced. What connects these two different threads is Cory Castro’s frayed vocals, gaining their power from a violent shout and their confessions from a measured whimper.

Combine that range with a set of lyrical themes that play out like an uneasy three-way phone call and what remains fills speakers with a darkness offset by instrumentals which sway and bend with warm nostalgia.

But what fills most of Free Throw’s golden playbook is a commitment to winning their own way. After strings of DIY touring circuits and an intense love affair with their van, it’s clear to see their blooming, road-tested legacy answers to no one but their enthusiastic audiences. With their live sets packing rooms across the country, not without alcohol and crowd sing-alongs in tow, it seems this grind has paid off so far, with the grit packing their songs with not just unrelenting talent, but the forward-thinking energy to match.