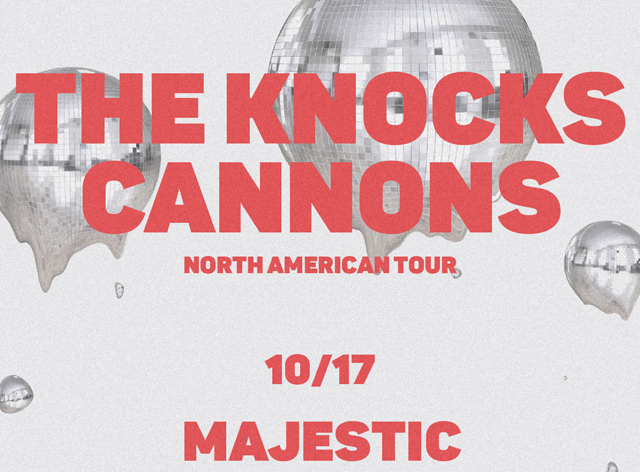 Artists
The Knocks
The Knocks are multiplatinum selling artists The Knocks have been hailed worldwide for a carefree electronic sound that freely draws from soul, funk, disco, hip hop, house, and pop. Comprised of James Patterson and Ben Ruttner, the NYC-based duo have unleashed a dizzying array of dance music for more than a decade, spanning two acclaimed albums, multiple EPs, collaborations with artists across the musical spectrum, high profile network TV appearances, and show stopping DJ sets and live performances all over the world.

With touring halted to a standstill during the global lockdown, The Knocks opted to dedicate their time to the studio and began releasing a stunning string of new tracks including "Bodies," a collaboration with indie pop combo MUNA that saw both acts joining forces for a striking remote performance on ABC's Jimmy Kimmel Live!

Next, The Knocks linked up with Australian indie rapper Mallrat for "R U HIGH (Ft. Mallrat)," scoring a #1 smash on Australian radio's triple j "Most Played" chart. The hits kept coming through 2021, including "Sound The Alarm (Ft. Rivers Cuomo of Weezer & Royal & The Serpent)" "Bedroom Eyes (Ft. Studio Killers)," and the emotionally driven love story, "River (Ft. Parson James)." The Knocks were featured on "Purple Disco Machine's platinum smash single "Fireworks," proving to be one of the biggest international hits of summer 2021, racking up more than 170M global streams to date and reaching the top 20 on the Global Airplay Chart.
Cannons
In a fever dream, the temperature rises, and reality slips in and out of focus. You may be asleep, but you never forget how it felt (even if the details remain fuzzy).

"A fever dream is a strange situation that feels like a dream," Michelle observes. "It's a confusing experience. You're dreaming, but you're also awake. This sentiment threads through the album. Over the last couple of years, writings songs lifted our spirits. These songs came from different places for all of us even though we went through life together. So, we used this medium as an escape from reality. We hope listeners can exit to a dreamscape in our music."

CANNONS have consistently enabled escape via their songs. Following a tireless grind, they quietly shook-up popular culture with their 2019 independent sophomore outing, Shadows. The single "Fire For You" initially toppled The Hollywood Reporter's Top TV Songs Chart at #1 in the wake of a placement on NETFLIX's Never Have I Ever. The success translated to multiple radio formats as they clinched #1 on both Alternative and Triple A, earning them a 2022 iHeart Radio Award nomination for 'Best New Alternative Artist.' With the song notably eclipsing 77 million Spotify streams, SiriusXM touted the band on the "Class of 2020," while YouTube named CANNONS among its "Artists on the Rise." Beyond inciting critical applause, they wowed audiences at Lollapalooza, Firefly, Outside Lands, and more.
Juliana Madrid
Juliana "Jules" Madrid is a 21 year old singer/songwriter hailing from Dallas, Texas.  Madrid combines elements of folk, alt, and pop to write sardonic, coming-of-age tales that are relatable yet uniquely her. Jules started in music at the young age of 9, learning guitar at the encouragement of her parents.  Soon after, she enrolled in a local program called School of Rock. There, she began to find her voice while realizing she also had a knack for songwriting too, using music as a creative outlet to express herself.
Media
Media
Media