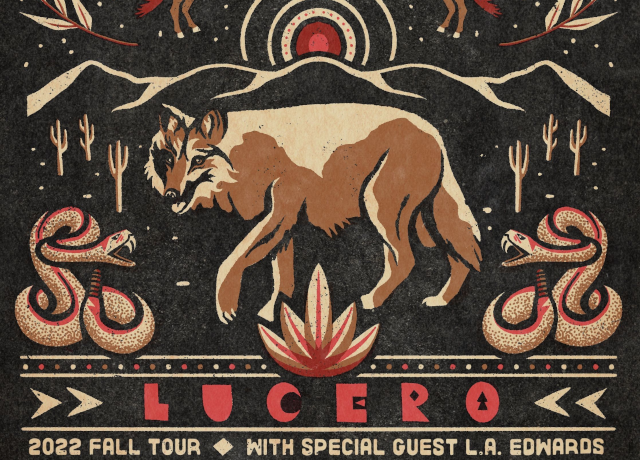 Women & Work is a love letter from Lucero to its hometown, Memphis, Tennessee. “Having a band in Memphis puts you in a tradition,” says Lucero frontman Ben Nichols. “We started at punk rock shows, not necessarily playing punk rock, but coming from the outside, from a bohemian place.”

The bohemian tradition is just as strong in Memphis as the city’s series of international hits. The popularity of Sun, Stax, Elvis, and Al Green doesn’t diminish the influence of the blues, Jim Dickinson, and Alex Chilton. The bridge between the shadows and the spotlight has become the heart of Lucero: Unafraid to mix pop with their anti-pop, they always charge into new territory.

As punks, Lucero were masters of restraint, with country music beer stains dribbled down the front of their shirts. As whiskey-soaked bohemians, they didn’t shy from sweeping Americana tableaus. And then they added an accordion. “When we started, we were building on a foundation we weren’t aware of,” says guitarist Brian Venable. “Listening back to our early stuff, we hear ourselves reference the old Sun Records. We didn’t hear it or feel it then, but we hear it and feel it now.”

Women & Work, their 8th album, is such an exciting presentation of the band’s eclectic explorations that it makes their 14-year meandering path appear to be a straight line to this very record. “We’re more comfortable in our own skin as a band, more comfortable acknowledging regional influences,” says bassist John Stubblefield. “We wound up making a Memphis country soul record.”

Integrating horns, pedal steel guitar, all manner of keyboards, and even a full-on gospel chorus, Women & Work is a fully realized musical extravaganza. Drawing inspiration from Delaney & Bonnie’s obscure first album, Home, on the Stax label, Lucero’s ambivalence about tradition has been replaced by an exuberant embrace. Women & Work is like Arcade Fire baptized in Joe Cocker and Leon Russell’s Mad Dogs, then warmed with Don Nix’s Alabama State Troopers.

“On My Way Downtown,” the album’s lead song, tells the story: a reserved guitar riff sets the mood, a couple instruments quietly fall in and Ben adds the first contemplative vocals. The song seems headed firmly into the punk-rock-made-pretty territory of their roots—until the organ sustains a chord, the tempo ratchets up, and Lucero becomes a band that doesn’t ask but rather insists that you move your feet. Go ahead hipster—dance!

“Go Easy” is something new for the band: gospel music. A sing-along with a large female chorus, it’s more likely to close the bar than open the church, but when returning producer Ted Hutt (Gaslight Anthem) pushed the band toward a sacred sound, they realized it could cinch the album’s country soul feel.

“You work all week, thinking about women and the weekend,” says Nichols. “’Downtown’ is Friday night, ‘Go Easy’ is Sunday morning. The rest of the record is the party in between.”

Nichols recently moved from stage to screen, playing a lead role in the acclaimed MTV series $5 Cover, directed by Craig Brewer (Hustle & Flow, Footloose). The character was a rambling musician, and Nichols brought authority to the performance. In 2009, he released a solo album, The Last Pale Light In the West, a collection of acoustic songs based loosely on Cormac McCarthy’s Blood Meridian.