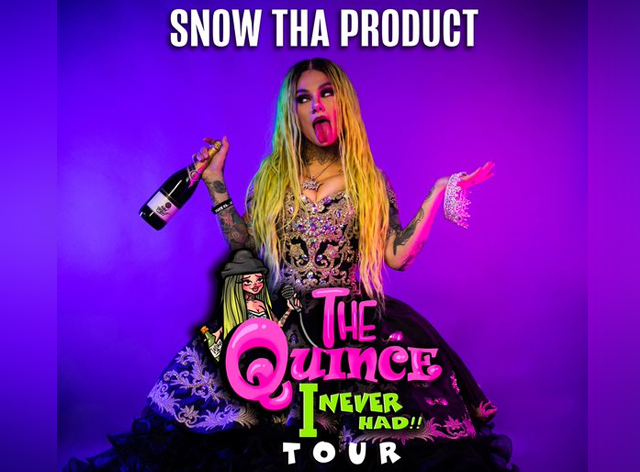 *Please note: Ticket delivery will be delayed until 14 days prior to the show
Artists
Snow Tha Product
Claudia Feliciano, better known worldwide as Snow Tha Product, is a singer, rapper and actress who has caused an unprecedented impact in the music industry. With her visionary character, authenticity, innate talent, and ability to break stereotypes she has become an undoubted revolutionary social change agent for Hispanic culture and the world of music. To date, the Latin GRAMMY-nominated singer-songwriter has a huge fan base, surpassing more than 3.2 million monthly listeners on Spotify and more than 8.8 million combined social media followers. In addition, her music has reached more than 520 million streams on digital streaming platforms, and she has achieved more than 329 million views on her music videos - which has positioned her as one of the leading female artists of the new generation of rap and music.

The daughter of Mexican parents, Snow Tha Product was born in the city of San Jose, California. She grew up in a musical environment, as her father and uncles were part of a mariachi group, who inspired her to pursue her dreams in the music industry. Her music has been deeply influenced by her Mexican roots, as well as childhood idols such as Maria Felix, Gloria Trevi, and Alejandra Guzman. Her influences and creativity have given her expansive artistic versatility, characterized by distinct innovations that fuse Rap, Hip Hop, R&B, Trap and Reggaeton.

After embarking on her musical career and collaborating with contemporary rap icons like Tech N9ne and Ty Dolla $ign, in 2013 Snow Tha Product managed to propel herself to international recognition with the release of hits like “Play,” “Hello” and “Doing Fine,” songs that amassed tens of millions of streams and that broke language barriers. Building a strong fan base, in 2016 the artist decided to release her first EP, "Half Way There... Part 1," which impacted her fans debuting in the Top 10 of Billboard’s "Heartseekers Albums" chart. The album included some of her careers most imperative hits like "Nuestra Canción" and "Alright" with PnP Rock.

Expanding on her accomplishments that year, the rapper continued to integrate her roots into her musical endeavors and premiered her hit "Immigrants" alongside K'naan, Residente, and Riz Ahmed. Said song was part of the acclaimed album "The Hamilton Mixtape" - produced by multi-award winning artist Lin Manuel Miranda - and caused a great impact through international markets, earning Snow Tha Product her first MTV Video Music Award in 2017. That same year, the multifaceted artist demonstrated the versatility of her talent by participating as an actress in the successful Netflix series “La Reina Del Sur” giving life to the character of “Lil' T.” At the same time, she continued to release successes such as her collaboration with Arcangel, "Nuestra Canción, Part 2", which achieved more than 17 million views on its music video.

For 2018, Snow Tha Product decided to delve into the trap genre and deliver an avant-garde message that gave females and the LGBTQ+ community a voice in a genre dominated by male personalities. The artist released hits like "Help a Bitch Out” with O.T Genasis, "Dale Gas" and "Today I Decided," songs that managed to transcend the genre and reach millions of streams on digital streaming platforms. Additionally, at the end of 2018, she collaborated on the album “Vibe Higher Mixtape" with Castro Escobar, Lex the Great, Jandro, and others. This album debuted in the Top 5 of Billboard's "Heartseekers Albums" chart, and reached the "Independent Albums” chart.

In 2019, the artist focused on furthering her global reach, premiering songs like “Bilingue,” “Say Bitch” and “Gaslight,” as well as successful collaborations like “NoMore” with LexTheGreat” and “On My Way!” alongside Daddie Juju. For 2020, the singer-songwriter imposed her conquest of massive audiences by participating in the hit “Feeling Good” alongside international rap legend Snoop Dog, Natanael Cano, Ovi and Chicano CNG. The song surpassed 8.3 million views on its music video and was one of the most revolutionary releases of the year, being one of the first times that the worlds of rap and hip hop merged with the regional Mexican genre.

By 2021, Snow Tha Product solidified her spot as one of the leaders of Rap’s new generation thanks to great projects such as her collaboration with music producer Bizarrap on the premiere of her worldwide hit, “BZRP Music Sessions #39.” Thanks to its high global sales and digital downloads, the single debuted in the top 20 of Billboard's "Latin Digital Song Sales" chart and entered the "Billboard Global Excl. U.S.” chart. Similarly, the success of said single was recognized by the Latin Recording Academy when it was nominated for the Latin GRAMMY® for “Best Rap/Hip Hop Song.” Dominating digital platforms, the single became a digital trend and its music video surpassed 181 million views.

That same year, the singer also released her single “Esto No A Terminado,” which was part of the soundtrack of the acclaimed film, “The Forever Purge.” In addition, she presented a collaboration with award-winning artist Ludacris and renowned music producer Drumma Boy, "I Said What I Said," which trended online and garnered more than 2.3 million views on its music video. More recently, this year, the artist premiered her song "Wassap" with Gera MX and later released her latest single "Nieve" with Haraca Kiko, surprising her fans with new genre fusions.

In 2022, the artist also achieved great success with high-caliber collaborations with brands such as Rockstar Energy - who sponsored the creative direction of her single "Cobrar" - and McDonald's, with whom she worked on the "McDonald's Icy Tracks" campaign. This year also marked a defining moment in her professional and personal life, with the release of her autobiographical album "To anywhere", which includes the hits "Piña" ft. Lauren Jauregui, and "Bájala" ft. Santa Fe Khlan, which has consolidated her at an international level.

This year, Snow Tha Product was also part of the soundtrack of the movie "Black Panther: Wakanda Forever", with the song "La Vida" ft. E-40. Currently, the artist is preparing for her new tour, which will take her to more than 28 cities in the United States and will bring to life the most memorable concerts of her career to date.
Media