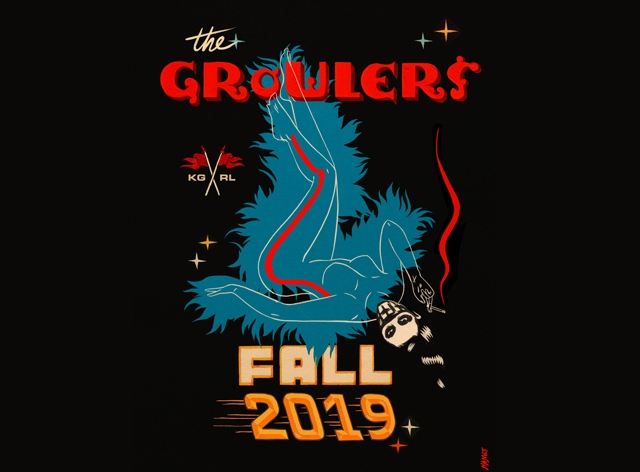 Since the release of their first LP Are​ You In or Out? In​ 2009, The Growlers​ have forged their own twisted path on the global music scene. They're the party band that grew into a traveling circus of psychedelia that spawned their own event, Beach Goth. Lead singer Brooks Nielsen draws a particular devotion among Growlers fans, as does chief cohort Matt Taylor, The Growlers' music director and chief guitarist. Their most recent LP was 2016's City​ Club,​ produced by Julian Casablancas, which saw them expand their palette to include West African, dance, and electronic influences. The band is currently in the studio with Jonathan Rado (Foxygen) and Shawn Everett (The War On Drugs) and preparing for their Beach Goth World Tour 2018.

Pinky Pinky
Pinky Pinky have good gut instincts. During an era of limitless distractions, societal pressures and sonic trends, the three best friends are focused on being happy and blissfully on the outside of all that noise. The trio grew up together in Los Angeles and there's a shared understanding of what makes them all tick. Together with her punk cohorts Anastasia Sanchez (vocalist/drummer, 20), guitarist Isabelle Fields (19), and bassist Eva Chambers (19) have a clear understanding that Pinky Pinky's modus operandi is in not overthinking their decisions. You can hear that on their debut album, 'Turkey Dinner' due on Innovative Leisure. It follows their two prior EPs, most recently 2018's 'Hot Tears'. Their first full-length, however, is even freer than their previous efforts. It's a patchwork quilt of garage rock and oddball indie. It's rooted in classic bass, drums, guitar, but it's bolstered by the perspectives of a trio of LA youths writing about their everyday observations, anxieties and passions.

For instance, “My Friend Sean” is a young fantasy about the dreamiest boy in class, “Mystery Sedan” is an LA story about a car being the only thing there in times of distress, “Lady Dancer” is about a stripper at a bikini bar in Los Feliz. When lead lyricist Sanchez met Chambers in the girls' locker room in High School they knew that they'd be in a band together (Chambers and Fields had already met in Middle School). All three of them had always dabbled in bands. Originally born in New York but moving to LA during childhood, Chambers began life in a band with her three older sisters, playing keys. She picked up a bass at the age of 13 after their endeavors had died a death. Fields, on the other hand, trained as a violinist but rebelled and taught herself guitar from the age of 12, while rearing herself on the Sex Pistols and riot grrrl bands.

Sanchez's father put sticks in her hands as a little girl. She was a prodigy in classical violin but also wanted to get back to the sheer pleasure of playing and so canned the anxiety-ridden music studies for her DIY drumming. She became a singer by necessity for Pinky Pinky, referring back to her love of Fiona Apple and even Heart for vocal chops. Pinky Pinky itself had a few iterations before settling on its three core members. “We were really trying to be punk at first then psychedelic then blues,” recalls Fields.

“Finally we got to a point where we knew we didn't need to focus on just one thing. Growing up you think you only should listen to one type of music but we got to a certain age and realized we don't need to do that.”

During their High School years they flew beneath the radar. “Nobody cared I was in a band,” says Field. Their first gig was at the MOCA museum in Downtown. To date it's the most nervous they've ever been. “I'd still be scared to do that,” laughs Sanchez, admitting to almost having a full-on panic attack due to the swathes of cool teenagers that turned up to watch them. Only recently have they hired a booking agent after already building a solid reputation on the LA scene hustling by themselves. When they played Dave Grohl's inaugural CalJam festival in 2017 they didn't even have a manager. “I got a call from someone who works with Dave Grohl: 'Dave really likes your band',” recalls Sanchez. “And I was laughing like, 'Weird? But cool?! It was a little surreal'.”

In company, the trio exhibit an airtight ease together. In the studio too, their process is super collaborative. They tend to jam out a song idea first then pick out lyrical themes. Whereas their first EPs were overcomplicated and limited by a prior standard of musicianship, their LP has been created with more confidence alongside producers Jonny Bell and Hanni El Khatib in Long Beach. “It took a long time for our EPs to come out,” explains Chambers. “And by the time they did we'd grown a lot.” Indeed, by the time this album arrives it'll be the most accurate representation of where Pinky Pinky is currently at live onstage and off it. They aimed to make a live -sounding record that didn't feel too shiny in its production. As a result, 'Turkey Dinner' is unpretentious, raw and unpredictably zany.
Media
Media