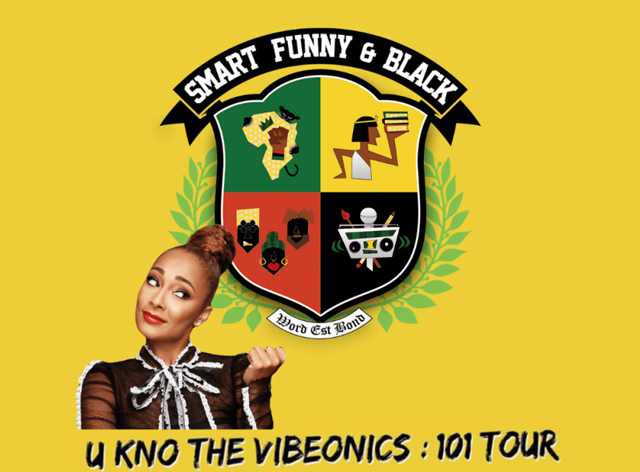 Additional Info
Moved from Masonic Temple - All Tickets Honored
Artists
Smart Funny & Black with Amanda Seales
“By any Joke Necessary!”  –Frustrated with the constant negative images of black people in media, unchecked appropriation, and the overall lack of education in African American history, (I mean, how did we not know about the, “Hidden Figures” women!?), Amanda Seales decided to use her humor, her Master’s degree in African American Studies, from Columbia University, and her love of games and music, to create a game show that serves as a safe space for the Black voice, and celebrates the many contributions Black Americans have made to history, pop culture and more!

With an uncanny knack for taking serious topics (racism, rape culture, sexism, police brutality, etc.) and with humor, making them relatable and interesting, she combines intellectual wit, exuberant silliness and a pop culture obsession to create her unique style of smart funny content for the stage and screens.

Along with performing stand up across the globe, and touring colleges doing comedic lectures on everything from sexism and diversity, relationships to black popular culture, this former MTV VJ with a master’s in African American studies from Columbia University is a series regular as Tiffany on, HBO’s “Insecure”, guest starred on, “Blackish, has performed stand up on Late Night with Seth Meyers and opened for Chris Rock, is creator/host of LA’s hit comedy game show, “Smart Funny & Black” at The Roxy, speaks truth to change via her wildly popular Instagram and weekly podcast, “Small Doses”, has written/produced/starred in two seasons of her scripted comedy, Get Your Life, available on www.Blavity.com and went viral after articulately and passionately confronting Caitlyn Jenner on issues of race and equality in America, during a live streamed dinner, hosted by Katy Perry, on Youtube.

A Jedi Khaleesi with a patronus that’s a Black Panther with wings, Amanda Seales continues to keep audiences laughing, thinking, and living in their truth!

U KNO THE VIBEONICS: 101 TOUR
Media