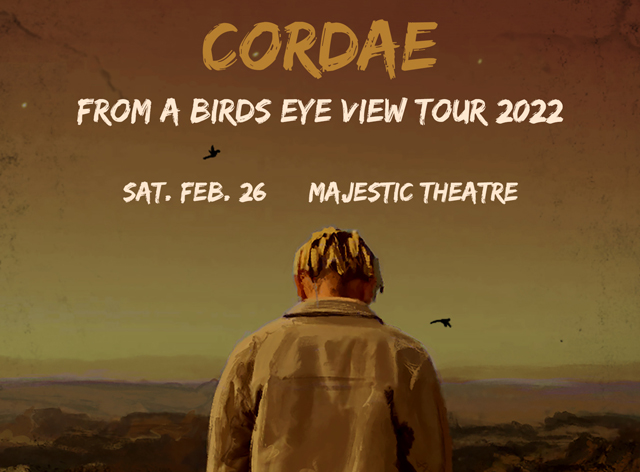 *Please note: Delivery of all tickets will be delayed until 2 weeks prior to the show

***
All attendees agree to follow venue policies (including health and safety policies) and posted instructions while at the venue. According to the CDC, older adults and people of all ages with serious underlying medical conditions may be at higher risk of death or severe illness from COVID-19. All attendees should evaluate their risk in determining whether to attend the event. By entering the venue, attendees voluntarily assume all risks related to exposure to COVID-19 and confirm that they will adhere to local quarantine mandates and the CDC quarantine requirements, available here.

Artists
Cordae
Cordae knows exactly what he wants to say. He chooses his words and phrases carefully. He tells stories with clarity and honesty. He speaks from a place of truth. That’s why the two-time GRAMMY® Award-nominated gold-selling Maryland-raised rapper has quietly become one of the modern generation’s most trusted narrators, depicting life’s trials, tribulations, and triumphs with powerful and poetic perspective and without filter. Absorbing wisdom from a life-changing trip to Africa, enduring the loss of a friend gone too soon, and evolving as an artist and a man, he tells this story in widescreen technicolor on his 2021 second full-length offering, From A Bird’s Eye View [ART@WAR/Atlantic Records], and much more to come.

Ultimately, there’s intent behind everything he says.

“Words are the foundation of human communication,” he muses. “What are we without words? To me, rap music is literature in song form. I took that approach with every track. I didn’t waste any space. I realized I could always use a better word for a situation. The album is from the heart, and the songs are real-life events and stories.”

A remarkable life has given him a lot to say. He went from trailer parks and public housing with his mom to stratospheric success. After a series of buzzing singles, he reached critical mass with his 2019 full-length debut, The Lost Boy. It bowed in the Top 15 of the Billboard Top 200 and included four gold-certified singles—“RNP” [feat. Anderson .Paak], “Have Mercy,” “Broke As Fuck,” and “Kung Fu.” Beyond unanimous praise from Billboard, Complex, High Snobiety, New York Times, Pitchfork, and Stereogum, he garnered a pair of GRAMMY® Award nominations in the categories of “Best Rap Album” for The Lost Boy and “Best Rap Song” for “Bad Idea” [feat. Chance the Rapper]. He’s the rare artist whose presence can be felt on-screen in a Super Bowl commercial alongside legendary Academy® Award-winning director Martin Scorsese and among XXL’s coveted “Freshman Class.” Along the way, he linked up with Roddy Ricch for “Gifted” as well as joining forces with Eminem for “Killer” (Remix).

Expanding his influence, PUMA named him the face of its “Unity Campaign,” while he also fronted a Bape x Coach collaboration. In addition to allying with Disney and ESPN to fund scholarships for HBCU students, he has taken to the streets in support of Black Lives Matter and contributed “Taxes” to NETFLIX’s We The People—the vision of Executive Producers Barack and Michelle Obama and Kenya Barris.

At the top of 2020, his mom encouraged him to keep a journal even just to personally collate all of these incredible memories...

“She said I was so blessed and should start writing about my days,” he recalls. “There were some amazing moments, but we were dealing with the fact my brother Simba is incarcerated and has 24 years. Everything inspired the album. It’s multi-perspective. Humans tend to be very linear, and we often think the whole world revolves around us. In reality, we have to see things from the shoes of others. In some songs, I’m painting a picture from the eyes of my brother. In other songs, I’m painting a picture of things I’ve gone through, seen, and experienced. The main thing I had to do was just live some life.”

He lived it to the fullest. In the midst of the Global Pandemic, he visited Paris, stopped in London, and spent four months in Ghana. The pilgrimage to Africa brought him to Egypt and Nubia, leaving him moved before he returned “home to the hood.”

“I learned about Kwame Nkrumah and how he built a home base for everybody,” he elaborates. “Malcolm X and Martin Luther King, Jr. went out there to visit him. Being in Africa was eye-opening. I wasn’t creating as much as I was reading profound black literature from the best authors of our time like Kwame, Langston Hughes, James Baldwin, and Huey Newton. It made me more introspective with my pen game.”

He initially teased the album with the single “Super.” Over a sped-up sample, he delivers an indomitable and incendiary flow laced with confidence as he assures, “I ain’t worried ‘bout it, I know God is with me.” Across the board, From A Bird’s Eye View cuts deep. Written in tears, “Mama’s Hood” deals with the survivor’s guilt of losing one of his best friends with no holds barred.

“My best friend in high school, who I played basketball with, passed away in the middle of the Pandemic,” he sighs. “It fucked me up. He came to visit me in L.A. Then, he went back home. Two weeks later, he got killed. I could’ve saved him. He was just with me. It impacted me a lot.”

At the same time, the intro “Jean Michel” captures an intense moment of “self-reflection.”  On “Want From Me,” he examines the “duality of man and woman and how one can’t exist without the other.”

Each time Cordae picks up a microphone, every word matters.

“Jean-Michel Basquiat said, ‘Art is how we decorate space, music is how we decorate time’,” he leaves off. “That’s what artists do. Right now, there’s a Black Renaissance going on in literature, art, entertainment, and film. I hope to add to that as a young man in this world trying to make a name for himself and leave a legacy with my words.”